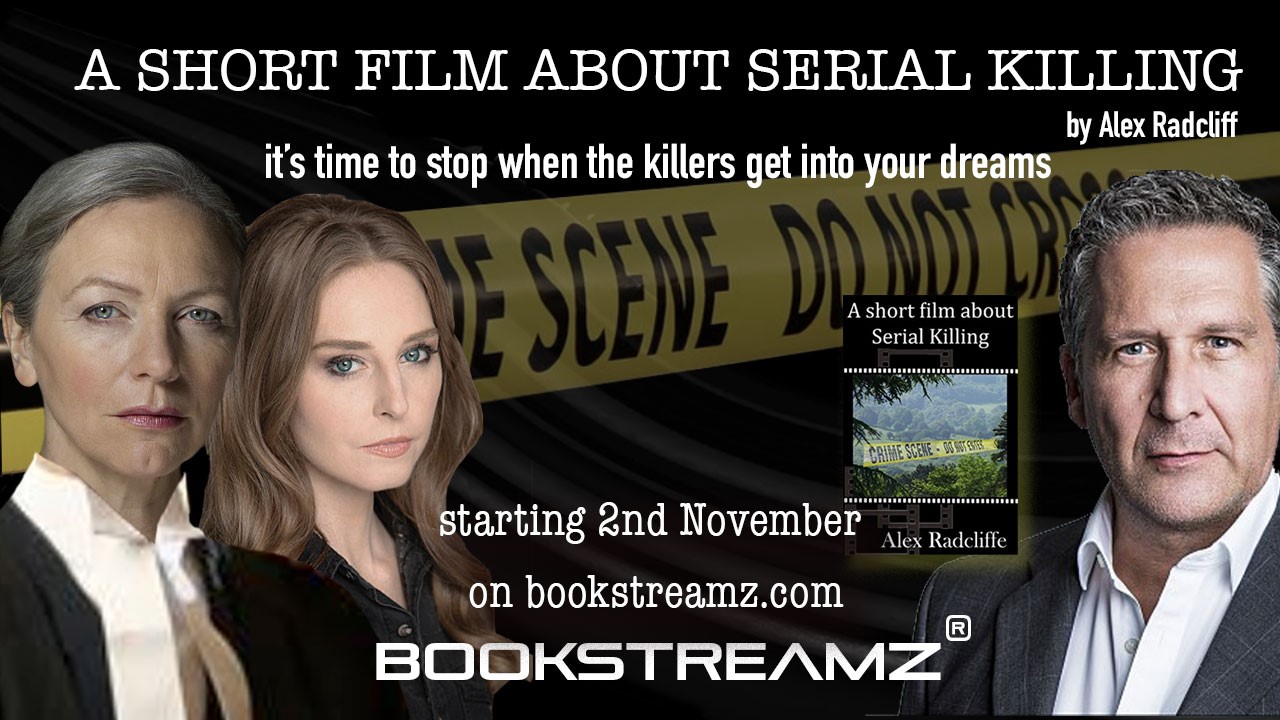 TEN TO ONE From Best Selling Author, Pete Howells

Besotted by the decimal system and at the sad end of a marriage Lorna makes her own dull world into something she can manage. Or does she? “When there are nine, potentially ten deaths you begin to wander through the random streets of Madness City and then, at some point you begin to wonder if the persona, the character you have created for yourself is any more real than the one you created for your now dead sister, your parents, the babies or, and this is where it all began to make some sense, the strangers you pass each day on the way to work (well not strangers exactly – more like family actually) all with a life that you have created. All with a story that you have made up in order to make sense of them. Ordering them. In order. All ten of them. One of whom is dead already.

And, to make things worse, the Sultan of Bling knows something of what you know about the deceased.”

A SHORT FILM ABOUT SERIAL KILLING By ALEX RADCLIFFE

‘A short film about Serial Killing’ is a gripping courtroom drama loosely based on the most notorious ever UK serial killers. Three women are locked into a battle with good and evil. Which – if any of them – is guilty? And what is she guilty of? With an explosive story, painfully true forensic detail and fascinatingly flawed characters, this is a compulsive page-turner. The narrative is riveting, the characters entirely believable and the case detail all too real.

“A vivid and scarifying novel. Once begun, I defy you to put it down until you’ve reached the end.”
(Nicci French, Novelist)

The story has Patricia Cornwell’s analysis of cold killers, the psychological complexity of Sophie Hannah’s characters and the raw social drama of the late Stieg Larsson’s work. Alex Radcliffe rivets the reader with a unique treatment of difficult and scary themes.

‘A short film about Serial Killing’ will be published initially in EBook format and is now available in 245 territories via Amazon and also pensup.co.uk. PenSup have no immediate plans to publish this novel in paperback format but are not dismissing the possibility in the near future.

The publishers know nothing about Alex Radcliffe other than the fact that the writer lives in London and has at least two other novels ready to go.

AN AUDIENCE WITH HENRY VIII By Ross Gurney Randall

An Audience With Henry VIII, a one man show, was first performed in 2015 at The Lantern Theatre, as part of the Brighton Fringe Festival. It was directed by Tony Haase.

It has subsequently been performed at the Kansas City Festival before touring.

The context of King Henry’s address is inspired; it turns out that he’s dead. This clever device facilitates a genuine revelation of his ‘true’ inner thoughts, both lovely and obnoxious.
Latest

The play slyly suggests that, no matter how much we think we know, understanding the inner workings of a person’s mind is something altogether different. It short this is anything but dry history. It’s a comic romp that at times achieves palpable poignancy.
The Kansas City Star