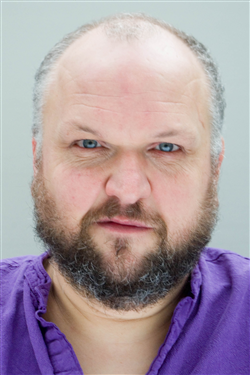 ‘His Majesty does not have syphilis. He wants to make that quite clear. As for the wives – there were perfectly good reasons why they had to go. And if we’re asking the awkward questions, Henry has one for us – where is God? Henry has been waiting 468 years to meet God and he’s running out of patience.’

The premiere of An Audience With HENRY VIII was part of the Brighton Fringe Festival 2015. It has subsequently had its international debut in Kansas City, where it received rave reviews.

‘An Audience With HENRY VIII’ is a one-act, one-man, play that unpicks the myths and exposes the character of our most famous king. Henry is at once a tyrant, a sportsman, a womaniser, and a poet. He is a dilettante, a musician, a braggart and a romancer. But above all else he is King. The play gives us an insight into the complexities of Henry the Eighth’s life and sheds light on his foibles and his regrets. This is not a question and answer session but, as the title, ‘An Audience With…’ may suggest, Henry anticipates our questions and through his revelations gives away more about himself than perhaps he intended. An Audience With HENRY VIII, far from being a history lesson, is a privileged encounter with this renowned, some might say, infamous character.

Negotiations to tour a slightly longer, Two Act, version of ‘An Audience With HENRY VIII’ are currently under way.

The play will be published by PenSup in both paperback and kindle format next year.